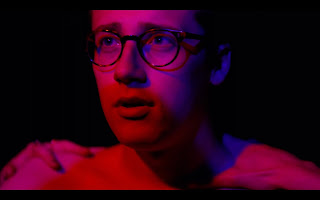 Still reeling from the death of his best friend, 17-year-old Shelby (Nicholls) returns to his boarding school to continue his studies. Lilibet (Barry), the most popular girl in the school, decides to take Shelby under her wing and with that comes an introduction to a brand new circle of friends. Charting his final year at the school, Shelby finds himself in a world of regular partying, with the lure of drink, drugs and sex always on the menu. Can he come to terms with the past or will his unresolved grief wreck his life?

The subject of privileged kids going off the rails at a private school is not exactly a new one but the lower-key approach of Sticky Toffee Pudding to its scenes of smoking, boozing and drug taking lends the proceedings a more realistic feel. The partying is not as elaborate and glamorous as other titles in the field would portray it and the consequences of it aren't over-dramatised in the main.

This also benefits from a couple of main characters who don't quite fit the template for this sort of thing. Shelby is a sensitive type but he's not given to the constant agonising that his role could have descended into. Yes, he keeps the journal of his deceased friend with him but he isn't prone to wandering the fields, quoting from it and moping around.

Similarly, Lilibet is set up as the sort of girl who would normally be bright and friendly on the surface but a thoroughly nasty piece of work underneath. Not so here, she turns out to be supportive and generally nice, even though she's particular about which people are allowed in her clique. There's also a will they/won't they subplot involving her and Shelby which is dealt with in a way other than the one you might be expecting.

In fact, the featured group of friends, as detached as they may be from the daily woes of folks in a much lower income bracket, broadly come across as less spoiled than the archetypes of this type of tale and most of them are not depicted as the braying, astonishingly irritating sort. They behave like most teenagers who are trying to be adults, regardless of their surroundings.

Within the group there are clashes between those who come from old money and the nouveau riche interlopers and there's one particular character that just has to be a bigoted, aggressive lunk to drive some of the action but the ensemble is interestingly flawed and didn't make me want to run screaming from the room.

Not everything may land, especially if you're not keen on listening to a dead girl reading flowery passages from her diary as a voiceover to flashbacks and hearing the odd line of dialogue such as "No point living in the past, singing with the ravens". The one character who isn't straight is somewhat underdeveloped and unfortunately he's something of a caricature. His story arc starts out intriguing and then heads down a dead end that isn't exactly the most unpredictable you'll have seen.

In avoiding an ending that winds up the melodrama, there might be a feeling that you've been short changed but the lack of screaming and tragedy upon tragedy fits pleasingly with the overall tone of the piece. Huge worries turn out to be nothing of the sort and it's the small things that you don't notice at the time which sometimes threaten to derail you.

When it comes down to it, this is a story about a group of folks who you might term "posh kids" but the absence of the ostentatious flourishes and exaggerated revelry usually associated with this variety of coming of age movie grounds it, making it more accessible. It may run too long - the middle section does sag a little - but the central performances from Nicholls and Barry make this worth seeing.

Yes, the arty contrivances of those journal sequences may be an acquired taste but they're meant with the best of intentions and although Sticky Toffee Pudding doesn't avoid all of the clichés it tries for something a little different and that's commendable. This may not, er, stick in the memory but it's sweet without being too sickly.

Darren Gaskell
Darren writes horror film reviews for Love Horror and Bloody Good Screen, he talks movies in general with Hayley Alice Roberts on The HD Movie Podcast and he contributes to this blog if he has the time. You might also find him at the odd film festival, convention or karaoke party.