SPIRIT OF INDEPENDENCE 2020: A SAVAGE NATURE 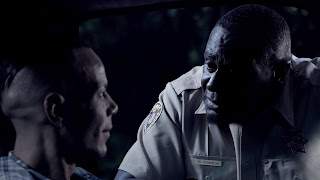 Lonely waitress Beth Walker (Whicker) is trying to make the best of her life in a quiet corner of Virginia. Her Afghanistan-veteran-turned-law-enforcer husband Pete (Polites) isn't the easiest person to live with but she's determined to make their marriage work. Beth has an unpleasant encounter with a couple of unsavoury types in the diner where she works but doesn't want Pete to know about it. This may not turn out to be the smartest decision ever when said unsavoury types turn up at their door later - and it's not to join the couple for dinner...

Starting out as a quintessential thriller set-up, complete with frail looking but potentially plucky heroine running up against some very bad guys, A Savage Nature then heads towards typical home invasion horror territory. So far, so sweetly assembled, putting everything in place for the expected battle for survival to play out when...well, I'm not going to tell you what the twist is here but it's a damn good one and all bets are off, let just leave it at that.

A Savage Nature's small cast means that the story can explore all of the characters in more detail than most genre pieces. Beth is given the most depth, as you'd expect, but the villainous pairing of Doug (Odom) and J.B. (Joseph Carlson) portrays them beyond just a couple of felons, hinting at a partnership that's endured more than a few bumps in the road. As the taciturn Pete, Polites is excellent at playing a guy whose military experiences have left him almost completely unable to express himself even though he knows this is damaging his marriage.

Of course, due praise, and much of it, must be given to the terrific Joanna Whicker, whose portrayal of Beth twists and turns with the plot as we discover she's a much more complex person than the timid waitress we first encounter in the diner. As with almost everyone in the story, she's hiding something and as the varying traits of her personality come to light it's testament to Whicker's performance that all of the shifts seem extremely plausible.

The screenplay, by Paul Awad and Kathryn O'Sullivan, contains not only that artfully crafted, aforementioned twist but several other rug pulling moments in which you're sure you're one step ahead of the plot only to find you're not. Once the action kicks into gear, the level of suspense continues to wind up and the only thing you can be certain of is that, for some of the folks featured, it's not going to end well.

A Savage Nature, in keeping with its title, does explode into effective bursts of violence from time to time but these are kept brief and the emphasis is firmly on building tension or adding another brain twisting layer to the plot. As the climax nears, that usual feeling of knowing who's going to walk out alive and who isn't is far less dependable for the viewer. Given the preceding events, you'll probably be waiting for one final, nasty surprise to throw you for a loop. Does it happen? Again, I'd be spoiling your enjoyment if I divulged any further information.

A slick, efficient, well-written thriller with a slew of savvy performances and, of course, the point where I actually said "Ooh, that's a twist" out loud as I was watching it, A Savage Nature delivers its pared down, keyed up goods with aplomb.

Darren Gaskell
Darren writes horror film reviews for Love Horror and Bloody Good Screen, he talks movies in general with Hayley Alice Roberts on The HD Movie Podcast and he contributes to this blog if he has the time. You might also find him at the odd film festival, convention or karaoke party.