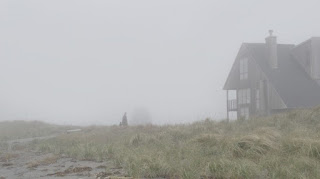 After a death in the family, Beth (Danika Vandersteen) takes her son Lowen (Woodrow Graves) to her mother's beachfront house in the hope that the change of location will help with the healing process. Do you think it will? This is a horror movie after all and it becomes obvious that something is clearly not right. Is it the house, is the somewhat odd local population or is it something else?

A slow burner - the spooky stuff doesn't really begin to kick in until about 45 minutes have passed - it's clear that The Crescent is playing its cards very close to its chest and isn't going to reveal its hand in any kind of sudden, grand gesture. Even the end of the movie is open to several interpretations and if you're the sort of person who wants a explanation for all of the weirdness then you might be frustrated at where this ultimately goes (or doesn't go).

This is the kind of movie where it's entirely possible to just sit back and soak up the atmosphere - and I really enjoyed doing so - but I appreciate that this may not be enough for everyone. Vandersteen is excellent in the lead role and Graves is amazing. He's the focus of the movie for an unexpectedly large amount of time and he's never less than totally convincing so bravo, young sir.

The Crescent offsets its somewhat languid pace with its fine performances, arty visuals and agreeably tuned sense of creeping dread. There's much to admire but I was also struck by the thought that it would have also made a breathtaking short.

TIGERS ARE NOT AFRAID 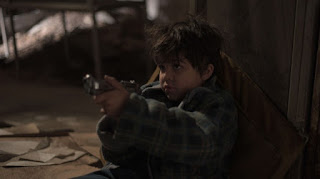 After her mother is kidnapped by a drug cartel, 10-year-old Estrella (Paola Lara) falls in with the streetwise El Shine (Juan Ramón López) and his gang of orphans. Given three wishes, Estrella looks to use them for good but with a tide of violence threatening to engulf the city and a vicious drug lord in pursuit of the children those wishes don't quite have the consequences she'd expected...

An undoubted highlight of the festival, Issa López's film may invite comparisons to the work of Guillermo Del Toro but the fantasy elements in Tigers Are Not Afraid are not as pronounced and are never allowed to overwhelm the grimy, terrifying reality of the situation portrayed here.

An early sequence in which a class of kids press themselves to the floor as a gunfight rages on the streets outside is a masterclass in unbearable tension and unseen terror, setting out the movie's stall with consummate skill. You'll have few chances to breathe easily over the 83-minute running time and at the end of it all you may want to take a few quiet moments to appreciate fully this extraordinary movie.

The performances of the child actors are nothing short of astonishing and they carry the movie with a confidence and magnetism which belies their years. The urban setting is a fascinating one, with rooftops, abandoned buildings and the darkest recesses of the city being played for both their magic and squalor. The scares are skilfully played, the emotional journey devastating.

A beautiful, brutal piece of cinema, this is essential viewing. 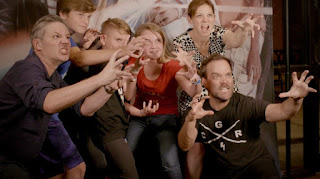 Who remembers The Monster Squad? I certainly do. However, it appears as though many people out there don't, or at least didn't. André Gower's documentary traces the making of the film, its subsequent - and thoroughly undeserved - tanking at the box office, and its unexpected resurrection as an ever-growing bunch of fans championed the film (and continue to do so).

With contributions from the film-makers and the fans, Wolfman's Got Nards expertly balances anecdotes relating to the shooting of the original movie itself with a variety of vignettes featuring those for whom the 1987 monster mash holds a special place in their heart.

The subject matter would be more than interesting enough to work as a documentary on its own but where Wolfman's Got Nards truly scores is the unexpected emotional punch it packs, whether it's Fred Dekker musing with no little candour on the piece of work which severely damaged his career following its failure at the box office or the heartwarming stories of TMS' legion of fans both young and old.André

It's also pleasing to catch up with the Squad's cast as we follow them on a tour of the US (and beyond) to screenings of the film and their joy at being a part of what's clearly becoming a phenomenon genuinely comes across - they seem such a nice bunch I was left feeling glad that the world finally caught up and realised their horror film is not only terrific but appeals to all age groups. That's something worth celebrating.

Ultimately, it's a story of family (both that of The Monster Squad's cast/crew and the wider horror community), a tale of an injustice being righted - as the movie finally began to gain the traction which had eluded it for so long - and a timely reminder of just how bloody good The Monster Squad is. It fully deserves to be loved by an entirely new generation of viewers and Wolfman's Got Nards is the perfect companion piece.

Oh, by the way, I mentioned that the cast seemed such a nice bunch in an earlier paragraph. Well, André Gower - the director of Wolfman's Got Nards and Sean in The Monster Squad - was in attendance at Celluloid Screams and I don't really know how to break the news to you but...yes, he's a cool, smart, funny guy who happens to have been in a great horror movie and has now made a great documentary. Damn you, André. 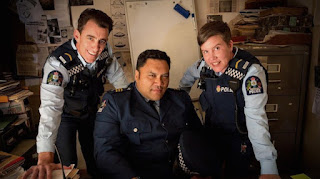 Since their appearance in What We Do In The Shadows, you might have been wondering exactly what Wellington Police Department Officers O'Leary (Karen O'Leary) and Minogue (Mike Minogue) have been doing. Wonder no longer as we discover they're, er, still with the Wellington Police Department and they're about to be assigned to the brand new, ever so hush-hush Paranormal Unit which has been set up by their Sergeant (Maaka Pohatu).

Over the course of six episodes we follow O'Leary and Minogue in documentary style as their investigations bring them face to face with demons, aliens, ghosts, werewolves, vampires, zombies and, most terrifying of all, clowns. It's all part of the job as they work the focal point of supernatural occurrences that is New Zealand's capital city.

This series is scheduled to be broadcast in the UK in 2019 and I would urge you to catch it because I don't remember laughing this much at anything in a very long time. There's an innate understanding of classic horror monsters and tropes at play here and this is used to mine the proceedings for maximum comedy effect.

The Law of Averages (and episodic television) would suggest that, out of the the six episodes which form Season One, there'd be a duff one among the bunch. Not the case here as the quality is ridiculously, consistently high. Each investigation is packed with laugh out loud moments and across the instalments there are some nicely played running gags, particularly one concerning the security systems which, er, "protect" the access to Sergeant Maaka's "secret office".

Of course, this wouldn't work quite as well if the two leads weren't so engaging. O'Leary and Minogue as, er, O'Leary and Minogue are bloody hilarious and their deadpan double act is an absolute joy. Even their most mundane exchanges are loaded with comic smarts to the point where there's a risk you might miss the odd gag because you're still laughing at the previous one.

The two stars were also in attendance - in character - at the Celluloid Screams screening to introduce their series and to provide assurance on the safety precautions which had been taken to ensure our safety. They also managed to weave in a brilliant joke about something which had happened during the screening of Halloween a couple of nights earlier and Officer O'Leary was on hand to helpfully explain the cuts to black which signalled the ad breaks.

Possibly the most fun I've ever had at a cinema screening, this was three hours (including Q&A session) of pure delight and the experience of being in a packed auditorium laughing themselves silly over and over again is something that will stay with me for a very long time. What else can I say about Wellington Paranormal but "more please". And it looks like there may very well be more, which is great news. 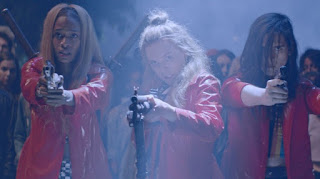 When a local politician's salacious online details are hacked, the small town of Salem is abuzz with gossip. Things take a much worse turn when all of the town's dirty secrets are leaked, leading to local girl Lily (Odessa Young) finding herself at the centre of the subsequent witch hunt (well, that's what happens when you live in Salem) and ending up in a fight for her very survival along with three of her friends...

Beginning with the Universal ident, I was ready for this to deliver a studio-neutered vision of mob violence, soft-pedalled vigilante justice and multiplex-friendly "abhorrent" behaviour. Boy, was I wrong. Assassination Nation pulls very few punches in its two-hour attack on what a bunch of preening, privileged, pathetic little pricks human beings can be.

Apart from one overly theatrical flounce out of the cinema (dramatically pronouncing the film to be "an abomination" - yeah yeah, wanting attention much?), the feeling after the screening was that a large proportion of the Celluloid Screams audience found this a gripping, confrontational experience.

Boasting a quartet of teenage female characters that actually feel like smart, rounded people rather than a collection of wisecracks and angst which just sounded good to the writer, Assassination Nation builds nicely, wisely saving its full tilt into gory horror for its third act when the shit really hits the fan and everyone gives full vent to their inner keyboard warrior.

The potential ills of social media may be something of a soft target but this film deals with the subject in an adept, fearless way, mixing its terror and suspense with a deliciously dark dash of comedy. It's bold, it's brash and it's rather brilliant.

YOU MIGHT BE THE KILLER (CELLULOID SCREAMS SECRET FILM) 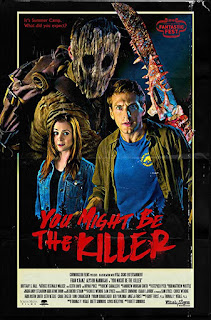 Camp counsellor Sam (Fran Kranz) calls his good friend Chuck (Alyson Hannigan) with a doozy of a quandary. He has sketchy memories of the previous few hours and now there are murder victims littering the place. Chuck's knowledge of horror movies will come into play as she and Sam attempt to piece together what's been going on because at first glance it seems as if Sam might be the killer. Well, it is in the title, after all.

A deconstructed slasher film which begins near the end and then spends its 90 minutes filling the gaps in the plot's timeline in ways which are frequently non-linear, this has a fair amount of fun with its premise and it's crammed with amusing nods to the all-too-familiar tropes of the camp counsellor carnage flick.

It's also fun to see Alyson Hannigan back in the genre and, although she spends the movie dispensing advice over a phone line while wandering the one location in which she works, her performance is one of the film's strengths. As the sweet but fiercely logical voice of reason, Chuck attempts to keep Sam on the rails as his situation goes from bad to worse.

In the final analysis, YMBTK doesn't turn out to anywhere near as groundbreaking as the early action may hint at but it's an amusing, gory, entertaining romp which didn't outstay its welcome and had me leaving cinema with a smile on my face. Which can't be a bad thing.

Darren Gaskell
Darren writes horror film reviews for The Horrorcist and Love Horror, he talks movies in general on his Socially Distanced Cinema podcast and he contributes to this blog if he has the time. You might also find him at the odd karaoke party,